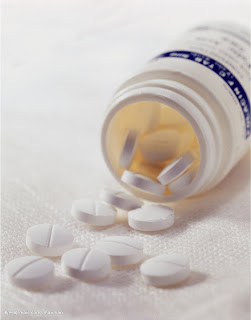 The pancreatic cancer presentation last week discussed the drug Metformin, which is one of the most widely used drugs in type 2 diabetes treatment.  The presenter mentioned it interestingly has anti-growth effects.  I decided to investigate this drug further in the context of cancer and found this study.  These researchers tested the effects of Metformin on MCF-7 human breast cancer cells and FSaII mouse fibrosarcoma cells.  The results suggest that Metformin can cause a significant amount of clonogenic cancer cell death.  Even more stunning is that the drug was preferentially cytotoxic to cancer stem cells (CSCs) relative to non-cancer stem cells.  Also, these researchers investigated the effect of Metformin on cancer cells being treated with ionizing radiation and found that it increased the radiosensitivity of the cells.  In effect, the Metformin “helped” the radiation kill the cancer cells.  This idea is very similar to my comments at the end of my presentation last Friday in which I mentioned the possibility that drugs taken in combination with traditional therapies could increase the desired effect against cancer cells while decreasing the negative effects on normal cells.  This study provides some compelling initial evidence in support of this theory.

Background Information
Metformin is used to treat type 2 diabetes because it suppresses gluconeogenesis in the liver and increases glucose uptake by skeletal muscle.  It also decreases insulin levels in the blood and increases insulin sensitivity.  Metformin’s anti-cancer effects were first noticed in cancer patients who also had type 2 diabetes.  Use of the drug to treat their diabetes suppressed development of cancers in the breast, pancreas, and lung.  Also, breast cancer patients taking this particular drug had a much better response to chemotherapy treatment compared to cancer patients without Metformin.  On the molecular level, it has been shown to induce apoptosis and cause cell cycle arrest of cancer cells in vitro.  It has also reduced incidence and growth of tumors in vivo.
It produces these effects by disrupting the PTEN/PI3K/Akt/mTOR signaling pathway that is involved in cell proliferation and survival.  Metformin causes an unbalanced AMP:ATP ratio by disrupting respiration in the mitochondria of the cell.  The increased AMP activates 5' AMP-activated protein kinase (AMPK).  AMPK in turn suppresses mTOR, which is the last link in the above signaling pathway.  Through this mechanism of action, Metformin disrupts cell proliferation.  Recent studies have shown that ionizing radiation also activates AMPK.  Therefore, Metformin can enhance the radiation-induced AMPK activation.  Through the same mechanism, they can work together to bring down the cancer cell.

Results
The researchers incubated MCF-7 human breast cancer cells and FSaII mouse fibrosarcoma cells with Metformin varying doses and times.  They found that the drug decreased the clonogenic survival of the cells at a dose and time dependent manner (Figure 1 A-C).  They also tested the radiosensitivity of the cells by measuring clonal survival after radiation with without Metformin.  The cells incubated with the drug before and after radiation had a decreased survival rate (Figure 1 D & E).  The following figures summarize these findings. 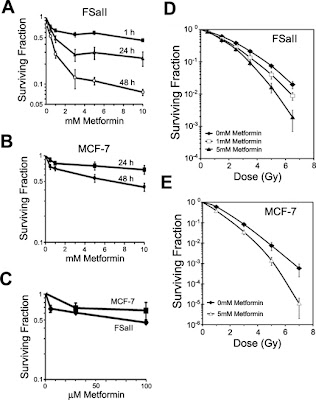 Clonogenic death of FSaII and MCF-7 cells treated with metformin alone or with radiation.

It was also observed that Metformin is preferentially toxic to cancer stem cells (CSCs) relative to non-CSCs.  The researchers took advantage of multiple characteristics of CSCs to conduct this part of the experiment, including the CD44high/CD24low surface markers of MCF-7 cells, high level of aldehyde dehydrogenase (ALDH1) activity, and the high activity of the ATP- binding cassette (ABC) transporter ABCG2.  The figure below illustrates the effect of Metformin on all three of these characteristics of CSCs.  Using the technique of flow cytometry, they observed that the drug decreased the percentage of cells with CD44high/CD24low markers, ALDH1 activity, and high activity of ABCG2. 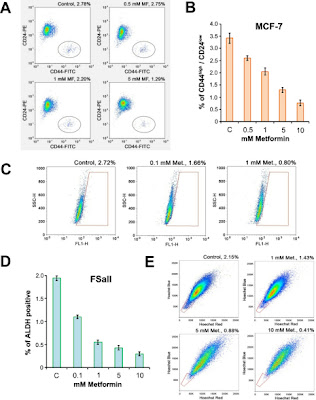 Effect of metformin on the CSCs or CS-like cells.
The researchers performed another experiment that basically had the same method and results as that of Figure 1 D & E, except they used live mice instead of cell lines.  They treated the host mice with 25 mg Metformin/kg twice a day and irradiating the tumors one hour after this treatment.  This caused a further decrease in tumor volume increase rate than radiation alone, as shown in figure 7A.  The x-axis of this graph should be labeled “Number of Days”. 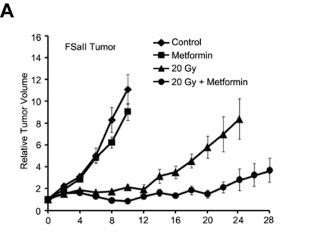 Figure 7.  Effect of Metformin and radiation on relative tumor volume of FSaII tumors.

This drug definitely shows the potential to increase the efficacy of radiation therapy.  The article says they observed similar effects in human MIAPaCa-2 pancreatic cancer cells and A549 cancer cells, but additional research is needed before Metformin can be considered a realistic player in cancer therapy.  Also, this drug may have adverse affects on the glucose-insulin system of cancer patients who do not have type 2 diabetes.  Even so, this article does provide hope that traditional therapies may be able to be “fixed” and not completely thrown out in the fight against cancer.
Song, Chang W., and Hyemi Lee. "Metformin Kills and Radiosensitizes Cancer Cells and Preferentially Kills Cancer Stem Cells." Scientific Reports 2.362 (2012). Scientific Reports. Nature Publishing Group, 2 Apr. 2012. Web. 1 May 2012.

Posted by bwhittemore at 7:25 PM

Check out the Cancer Biology Wiki.